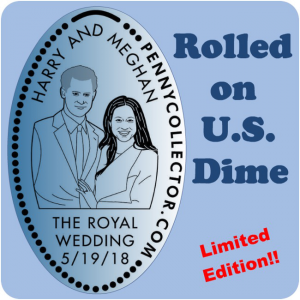 This elongated coin has been rolled using a circulated dime (ten-cent coin).

The wedding of Prince Harry and Meghan Markle1 was held on 19 May 2018 in St George’s Chapel at Windsor Castle in the United Kingdom. The groom, Prince Harry, is a member of the British royal family; the bride, Meghan Markle, is an American and former actress.

On the morning of the wedding, Prince Harry’s grandmother, Queen Elizabeth II, conferred upon him the titles of Duke of Sussex, Earl of Dumbarton and Baron Kilkeel. On her marriage, Markle became Duchess of Sussex. The Archbishop of Canterbury, Justin Welby, officiated at the wedding using the standard Anglican church service for Holy Matrimony published in Common Worship, the liturgical text of the Church of England.

This is a limited edition2 and is now retired.


Prince Harry and Meghan Markle have been declared husband and wife, following a ceremony at Windsor Castle.

The couple exchanged vows and rings before the Queen and 600 guests at St George’s Chapel. Wearing a dress by British designer Clare Waight Keller, Ms. Markle was met by Prince Charles, who walked her down the aisle.